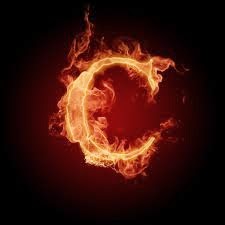 Hi everybody. Did you all have a happy Canada Day? Oops, I almost said "youz" instead of you. No kidding. I grew up in Ottawa Valley, where some people literally say youz. I don't know why. Maybe they think it sounds like saying you for more than one person. Like the vous instead of tu in French, my mother's language. I say we don't need any extraneous letters.
Now being a writer, I think a lot about words. I have spent over a thousand dollars on dictionaries, thesauruses  in various languages and grammar handbooks back in the day when books were all the rage. All this writing makes me wonder: Do we really need the letter c?


Now, calm down everyone. Russian (my father's first language) did it after the revolution, Punjabi (a highly spiritual language I study) modernized. As well as other languages, I'm sure. Throw away excess unnecessary letters (that was a redundant sentence, pun intended. Ha ha ha ha....


Now, please understand that I tutor English as a second language, and I am fed up of having to explain zillions of inconsistencies of our so not-phonetic language. My eyes glaze over as I recite this spiel in my school mistress voice:


"Now sometimes c is hard like cat, and then sometimes c is soft like dance." But why? Why not make space on keyboards for a smiley face key or a heart key or some other cute key instead of the letter c, as I see NO GOOD REASON. Why should I have to spend the rest of my life justifying such silly rules like why the letters "ough" has 7 different pronunciations. Is someone in love with the ugly combination of letters such as ough? Too much time to type, too much ink or pencil lead to write!


Wait! A dear friend close to me complained how would we spell words like church or Johan Sebastien Bach's last name? Are you with me? Why, Kh! Simple! And from henceforth silly words like khaki will be spelled phonetically such as KAKI. Kaki, I'm telling you, you don't need the H! Give it up! And Bach will now be spelled BOK! Like Bok choi, the Oriental vegetable! Are they in love with the letter c? I think we have a very simple solution. Henceforth, all the hard c's will be k's, and all the soft c's will be s's. I'm bordering on letter c-rage here. :)

Do you know how often people tell me Chinese must be hard to learn? I had Chinese roommates. No! Chinese has no tenses, no verbs to conjugate. You just say I cook yesterday, I cook today and I cook tomorrow instead of I cook, I cooked, I will be cooking.  And every word is a picture of what it is! No wonder the Chinese are practical. No silly abstract letters and vague accents and symbols. Thank God. Enough of that conjugation nonsense  in French, with some verbs having as many as 23 tenses. Have they nothing else to do in France?


( I am of French heritage.) But I see no need to lard efficient communication with redundant, rigid inconsistencies.

Time and again friends mistake my love of communication and culture and insist I teach English as a career. But I cannot teach a language whose grammar and spelling defy common sense.


I love my language and am proud of its rich past. But it's time to do away with repetitive letters. It's not as if we are so short on letters that we need to write k before n (knowledge) or p before s (psychology). Like, would we confuse noledge with knowledge? No! Or psychology with sychology? No! Shakespeare never spelled anything correctly 4 centuries ago and he is our greatest writer, long before spellcheck. Not needed at all. ( Just like those cigarettes that you and/or your loved ones don't need. Wink wink, nudge, nudge)


(No words were harmed in the writing of this post...Ha ha, without the letter c, tobacco would read tobao. But just think, if we were to succeed in rendering tobacco extinct, we could also rename it tobakko, or tobao and chuckle to ourselves and say, Oh, that old useless thing...) When you rename something, you often renegotiate your relationship to it.


Just a play on the idea that sometimes things that we think we can't do without are NOT all that important.

I hope you found this tidbit amusing. It is just tongue in cheek, after all. And guess how you can save your tongues and cheeks from cancer! Quit smoking. You can't really live without your tongue and cheeks but you can live very happily without tobacco. I want to say it like it is. That's what I hope to be. A fresh breath of air, entertaining you while educating you.